That's about all I can say.

These 22nd Winter Olympic Games are drawing to a close and what a finish for Canada.

Perhaps the most exciting hockey game ever played on Olympic Ice.

You can't tell - because this is radio - but I'm wearing my daughter's autographed Hayley Wickenheiser jersey today in honour of the hockey gold medal. I watched Wickenheiser play since the Canada Winter Games way back when... but what she showed yesterday in that almost-breakaway in overtime. The play that led to the US taking their fatal penalty?

Wow. What a tournament.

Now, I know there's a hockey game today. Canada and the US - catch it live here on CBC Radio.

I will be listening, but to be honest, the experience will be tinged with a bit of sadness.... win or lose for Canada.

Because, well... I wish they weren't in Sochi. The NHLers.

I spent a long time as a sportscaster here at the CBC. I watched Canadian athletes bust their rear ends to make it to the Olympics. The one time every four years when THEY got to shine in the spotlight. The one time that Canadian sports fans gave them their full attention.

But then the NHL joined up... and all the attention they get the other 3 years, 11 months and two weeks of the year also took over the Olympics.

I remember 2006, when every sports reporter ran to cover the arrival, the arrival, of the men's hockey team - leaving the silver medal from Beckie Scott and Sara Renner in the shadows.

Jian will be speaking with Kaillie Humpries in a minute. She just defended her gold medal on bobsleigh - an achievement that merited a ten-second cutaway from the men's QUARTER-FINAL hockey game against Latvia.

And did it bother anyone else that our own Ron Maclean and Peter Mansbridge seemed to relate every country and every other winter sport to men's hockey during the Opening Ceremonies?

Patrick Chan got into a lot of hot water a while back when he said he would be better supported if he skated for China. He wasn't wrong.

Look, I know millions will be watching today. As I said, I will be one of them. But I'd also be watching if this were the modern day equivalent of the Penticton Vees or the Trail Smoke-eaters.

There's word this may be that the last Olympics ever for the NHL crew.

Perhaps that's not such a bad thing. 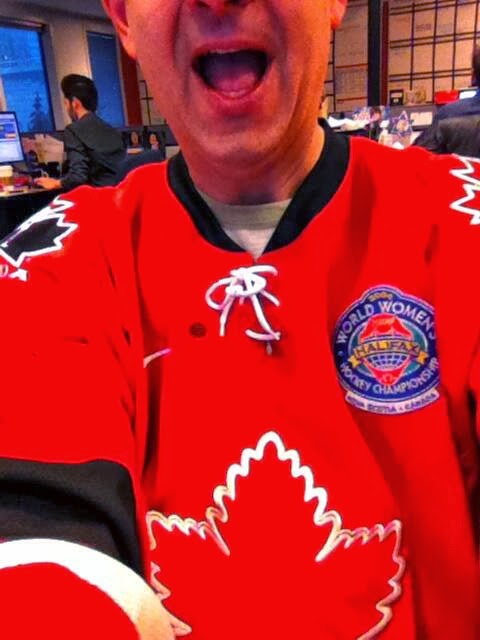 Posted by Kevin Sylvester at 11:50 AM