My book MiNRs is out in September, and I'm already well underway on writing the sequel.

Before there was even a first draft there were images in my mind that I had to put on paper first.

These helped me shape the mood and feel of the story.

(My amazing editor Ruta Rimas was even more important of course!)

This was one of the first images I finished. I even included it in the original pitch proposal to Simon and Schuster. It's not any character in particular, but shows some of the bleakness and remoteness of life on another planet, one that's been attacked. I had it pinned to my studio wall for inspiration. 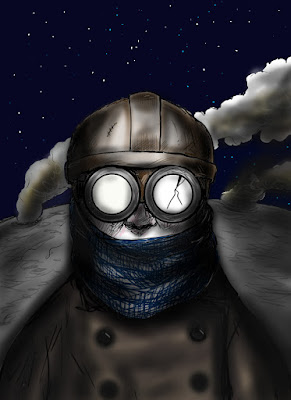 I'm often asked if I draw the pictures or write the words first when I'm doing a book. They happen at the same time and each feeds into the other. I'll always have paper and pens next to my keyboard to do a quick sketch of a character or scene.

Having said that, MiNRs isn't an illustrated novel (the way my Neil Flambé books are) but there are hundreds of sketches of the world of Perses in my drawing books and on my computer. I'll be posting some of them here from time to time once the book has it's official birthday. Which is....?

Posted by Kevin Sylvester at 3:10 PM

Hi Kevin. My son loves your books Minrsand Minrs 2. When will Minrs 3 be out? I see a cover image online but can't find a copy of it to purchase.
Much thanks. Cynthia

Hi Kevin, my son loves Minrs and has finished both your first book and second. When are you writing the third book in the series? Thanks!