It is School Library Month right now, so I thought I'd share a part of my school presentations that deals with my favorite part of the school. 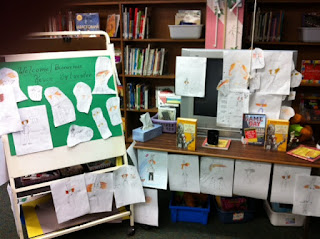 I loved my school library (Lewiston-Porter in Western New York). It was where I met George Gershwin (we had an audio room where you could listen to LPs), Beatrix Potter and F. Scott Fitzgerald. It was the one part of the school where I felt that I also had a say in what I learned and how I learned.

It was also the place where I learned I was going to be a writer.

This is the story I tell (right after I instruct the kids to bow down to their own teacher-librarian... which they do).....

I walked into my library around 4th grade. My teacher-librarian had set up a movie screen, which was a little odd (back in the stone age).

She said that this was a movie about writing. She said that I would know, when it was over, if I was going to be a writer.

Then I reenact the movie. 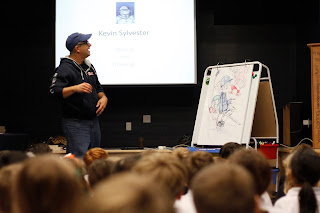 You see a scared young girl running through the forest. You only see her, not what's chasing her.

She looks back and screams, then trips and falls in a puddle.

She gets up soaking wet, looks back and screams again. She begins running again.

Suddenly, right in front of her, in the middle of the forest, there's a door.

The door opens a crack and a light shines through. She runs through the door, closes it.... and that's the end of the movie.

Then I repeat what my librarian said to me... What happens next?

I wanted to know what happened so badly that I went home and wrote four different possible endings.

The kids always have some idea in their own heads too... so I point out that they are writing too. 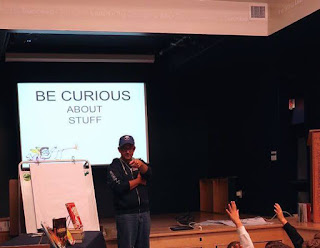 So, if you are in a school that's lucky enough to have a teacher-librarian, make sure you take some time this month to bow down to them!


Posted by Kevin Sylvester at 4:56 PM