Readers of my books, and blog, will know that I love the OLA's Forest of Reading program. It's amazes me every year how much students love to read and vote for their favourite books.

I've been honoured and lucky enough to be nominated again this year... TWICE!

It's my first time being nominated for the Blue Spruce. Splinters, my first picture book, is nominated. In honour of that, here's the sketch of Cindy, the hero of the book, that I kept over my desk during the writing and illustrating of Splinters. 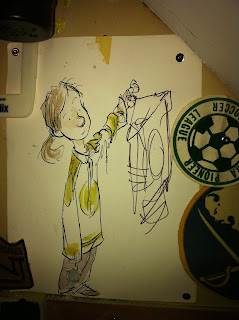 And Neil Flambe and the Crusader's Curse is nominated for the Silver Birch. That's three Neil books out and three nominations! I am gobsmacked! Here's a bonus pic that got cut from the final version. 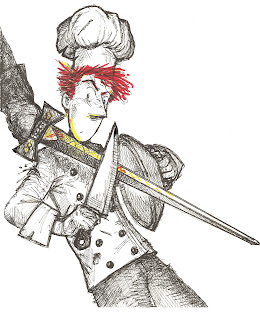 AND Neil Flambe and the Tokyo Treasure is released this week.... and there's a special "secret" release party this coming Saturday at 1pm in Toronto. Shhhh.... details later.

OOH! I can hardly wait!