I always try to use the Acknowledgements sections of my books to tell something about the world of the book - rather than just listing the (many) awesome people who make a book happen. I also want to make it something that someone will actually want to read.

So, given what's going on in the world these days (I've signed this petition for example) I thought I'd post my thoughts on what the conflict in the MINRs trilogy is about. That way you don't even need to buy the book!

So, here's what I wrote. (WARNING: CONTAINS SPOILERS)

First of all, a thanks to the types of people who read dedications.

I always try to make this bit of the book a little different, and thanks for paying attention to the details.

To be one hundred percent honest, I never thought this book would happen. You can check out the old posts on my blog if you want the full story, but the bottom line is that I owe a gigantic THANKS to you—the readers who fought to have this book written and published.

You helped spread the word about MiNRs, and that, in the end, is the only way a story can spread.

Fighting for what you believe in is never easy. It can drain you. It can demoralize you. But you did it, which means the world to me. And maybe more so for MiNRs than it would for any of my other books.

MiNRs is many things, but above all it’s a story of fighting, even when we don’t want to. But we always need to fight for the things we believe in, the people we love. Or else someone else will fight to take them away . . . and we’ll let them.

For Chris, Elena, and Fatima, that fight is with weapons. They don’t choose this or want it, but they accept it.

It’s a fight no child should ever face. But real children are forced to fight in our world today. 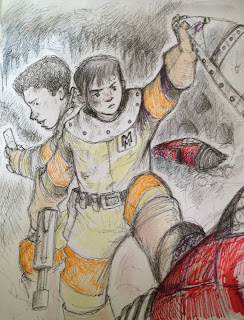 For the MiNRs, what separates them from others aren’t the rules of their fight but the way they choose to face it. They choose love, family, and mercy over cruelty, violence, and hate. There’s no fairy-book magic to this—they lose a lot along the way—but they don’t sink to the level of Thatcher.

Not all fights are violent, or even battles in the traditional sense. In fact, for me, the toughest ones happen in your head and are fought with words and ideas.

There’s an exchange in this book where the kids talk about scapegoating. Fatima argues it’s worse than violence. And my editor (the awesome Patricia Ocampo on this book) and I had a back-and-forth about this.

Because, for me, the scapegoating is worse. It’s foundational to any violence that happens later. Attacking someone we see as the same as us? That’s horrible! We recoil in shock.

But attacking someone who is different is way easier, and people will join in and support it because “they deserve it.”

And it’s so insidious. It doesn’t actually begin with hate. It begins with searches for simple answers. The world is complicated, and that can be a really hard truth to recognize. And it makes it really hard to figure out what you need to do to make good choices.

So we pretend that isn’t the way the world works. It’s easier to see the world as simple.

So much easier than saying, “Wow, the world is complicated, and some people are poor and violent for all sorts of reasons. Maybe the two are even related and poverty breeds the sorts of desperation that leads to some types of violence.” And that’s just the tip of the complexity iceberg, as they say.

And once you accept that simple worldview of them vs. us, the rest can devolve quickly.

They don’t just cause their problems, they cause ours. They are opposed to what we stand for and are a threat to our way of life. This type of prejudice is what Thatcher exploits to turn people against grinders, and toward him.

But they are you.
We are we.
And above all, love is love. That’s what breaks the cycle—loving others.
Loving them and not judging them.

It’s easy to hold on to hate.
Pavel does.
Thatcher does.
But Chris doesn’t.
Elena doesn’t.
Fatima—a member of a “they”—doesn’t.

And that makes all the difference.

Hate might win sometimes, but it makes the world a worse place.

Love might lose, but it still makes the world a better place.
It’s tougher to actually promote love.

You need to fight to push yourself, and push others, to do just that.


Posted by Kevin Sylvester at 2:35 PM