Like many city dwellers (Toronto being my hometown) I am saddened but not surprised at the rise in pedestrian and cycling deaths on our streets.

Everyone is in a hurry and walking, cycling and driving in a silo.

As a cyclist, walker and occasional driver it's intersections and crosswalks that are the main areas of conflict (no kidding - just check out this story from The Toronto Star).

So, as an experiment I've been trying to (A) brake when a light turns yellow - in a car and on my bike (B) stop crossing by foot when the "don't walk" countdown starts and (C) coming to a complete stop at stop signs on my bike. It's like my heart rate is now slower. I'm less angry and frustrated.

Anyway, all that is to say that I've come up with a mantra I tell myself now. "Take a Breath." I even made a poster. Feel free to share. #TakeABreath 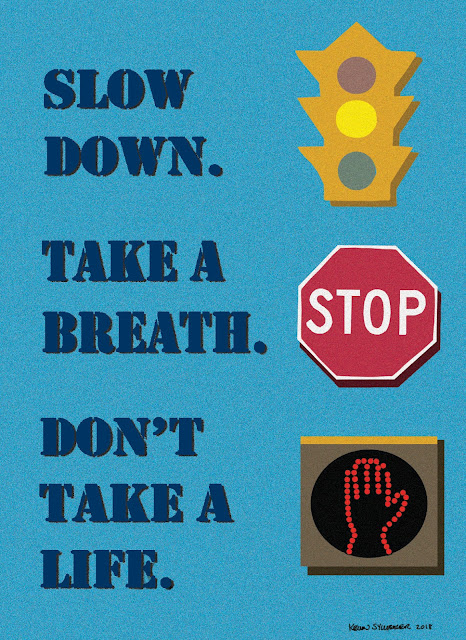 This has been in my head a while, but I didn't think to make a graphic about it until now.

The idea popped into my head a few years ago. I was sitting with my friend Peter (after a death-defying bike ride to his house) and he mentioned an ad campaign from Australia called "Dead Right" which stressed that you might legally be in the right crossing a crosswalk, but a car can still kill you if you aren't paying attention.

Can't find the details on that campaign BUT I did find this weird and wonderful safety video from an Australian rail company called "Dumb Ways to Die").