I have caught the NerdCamp bug

This was my fist ever NerdCampMI.

My friend - the awesome Debbie Ridpath Ohi - has been going almost since the beginning and has praised the meet-up. This year, I finally made it. And... wow, was she right. 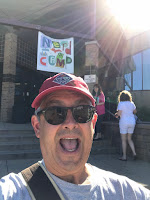 I thought it might be helpful to talk a bit about what it was like to be there for the first time, and why I found it so hopeful and transformative. (And trust me, this is a hugely condensed version of all my thoughts.)

These are strange days in education. I've written on this blog before how saddened I am by the loss of libraries in schools. Well, this was  gathering of people who are dealing with that (and more) first hand and are fighting against the trend.

The Nerd Talks opened up day1. All the speakers were amazing, but a few really knocked me for a loop. (I doodle while I listen to people talk instead of taking pics.) 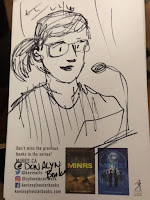 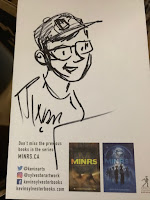 Colby Sharp and Donalyn Miller are two founders of this whole thing and welcomed everyone by talking about how crucial books and stories are for giving kids the skills they need. Donalyn even suggested cancelling fines for kids who return books late as a way to level the playing field. 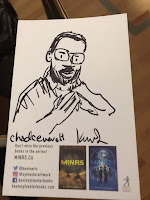 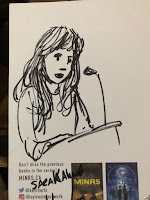 Chad C Everett gave a speech saying that the times for some books for some kids are over. All kids need to have access to stories in today's revolutionary times. It was a call to action across all the boundaries that separate us in schools and in the world of kids lit.

Sarah K Ahmed
talked about being a hyphenated American and what that means in today's world. Look out for each other. Tells your stories and listen to other people's stories, not just the ones you already know. 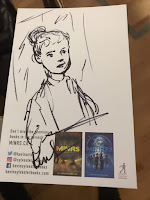 Pernille Ripp talked about how books can offer paths out of depression and sadness for kids, especially ones experiencing bullying. (She's been sharing some tough personal stories on her blog which you should definitely check out.)

Then we broke into the day1 sessions. 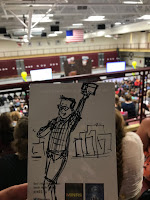 If I have one criticism it's that there are TOO many interesting sessions. I gave one on using humour to trick kids into learning. But I also snuck peeks at others, including Arree Chung talking about his beautiful (and wickedly clever) new book Mixed.

Then it was an hour of book love from Mr. Schu. When he gives out books he loves to a hepped-up crowd it's like watching The Price is Right. Maybe the Print is Right?

And then it was one of my heroes Dav Pilkey, who closed out day1. I've had a chance to meet him a couple of times and he as down-to-earth and nice a guy as you can ever hope to meet. He also writes great books. 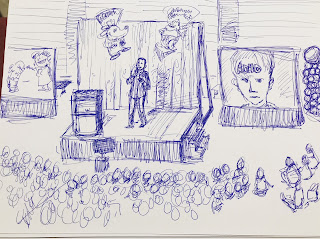 He gave a tribute to him mom, who helped him adapt to his ADHD and dyslexia by letting him read whatever he wanted to read. (I actually, appropriately enough, nerded out on him in the hallway after the speech to tell him how moving it was.)

All the speakers hit the note that we seem to miss in so much "high-level" education chatter about standardized tests and quality metrics - that each individual kid has individual needs and talents.

And books are one of the best ways to get those kids to find their own path to knowledge and curiosity.

And, yes, there is a lot of talk here of "fighting" and "revolution"and the people at NerdCamp did come to the  event to arm themselves - with skills, strategies, ideas - to fight.

BUT not to fight against anything but for every single kid in their classrooms or libraries or (from an authors perspective) their readership.

And this is all done by Volunteers. VOLUNTEERS. Using their summer vacation to gather and share info on the best way to get kids to read, to learn to think.

The theme of "fighting" continued in informal discussions with educators about the battles they are having to keep books for "different" kids in their libraries and schools. But they are not giving up. And we authors need to keep writing those books and keep visiting and supporting those schools. 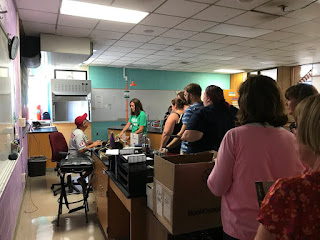 So, I'll be up front. I went into this NerdCamp experience slightly depressed about the state of the world, and also very cynical about talking about education. Every single person I met there helped me feel better. One teacher I spoke with the first night said she feels like she's coming home to her family the second she arrives at Nerd Camp. I get that 100%.

And meeting all these people inspired me. This is where the battle for a better world will be fought and eventually won. It's the long game. And I'm in.


I could add so much more about my experience, but this is a blog not a book.

So, instead, some tips for first-timers.

1. Go with friends. There are 1700 people at this thing. You will make friends, but especially if you are a studio-bound hermit creator, it really helps to have friendly faces there at the beginning. 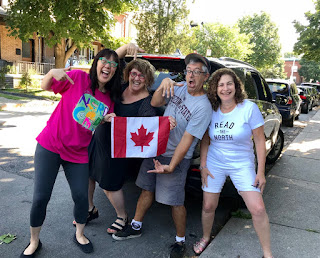 I was lucky to have an amazing group on my drive there and back.
Debbie Ridpath Ohi
Helaine Becker
Susan Rich (this is an excellent interview with Susan.) 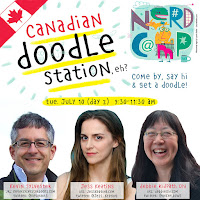 And the always awesome Jess Keating joined us for a Canadian Doodle Station where we handed out free cartoons (and some Canadian snacks, such as Coffee Crisp).

Which brings me to... 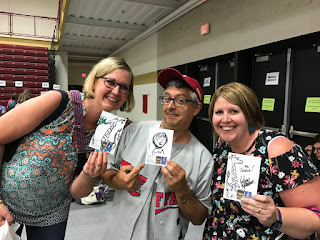 Everyone wants to talk to everyone else. There are no stars here. This isn't a BEA or ALA. So just say "hi" to everyone.

I used doodling to break the ice and make a ton of friends and connections. But this is definitely a conference where you need to be an extrovert. That's where I had the individual conversations that inspired me.

Jarret Lerner and I sat at the wrap up dinner and said, at almost the same time, that the educators we met were heroes.

In fact, one thing I'd change about my own session is that I'd shut up and ask more questions from my audience. Next time.

3. Bring stuff. I handed out hundreds of doodles on. I also had some extra stock of MINRs and Super-Duper Monster Viewer that I handed out. Attendees (adults and kids) love getting free stuff but it's also, like I said, an amazing way to break the ice. 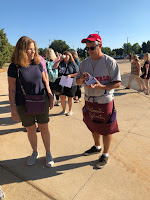 There is an author signing at the end of day one BUT, this event is NOT about selling books. Yes, that's part of it (thanks BookBug!), but I think what's more important is making connections and finding out what educators and kids are looking for in their stories.

3. Small thing, but book a hotel for the night before it starts and stay after Nerd Camp Jr. wraps up. 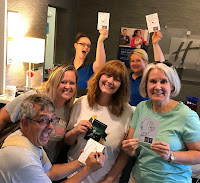 We stayed at the Holiday Inn Express, where I met educators before even checking in and gave them doodles in the lobby! 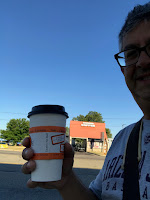 (Extra bonus - the hotel is a 5 minute walk away from Jackson Coffee - where they let me walk through the drive-thru for an excellent latte!)

Oh yeah, Nerd Camp Junior is when you get to meet the kids and talk. You will have to do a really fast version of whatever it is you want to present. The rooms could be a little hot, so dress in shorts. The tech people and staff helpers were all amazing - no glitches at all.

The kids want to be there (90% of them anyway) and they are almost as all as nerdy as I was as a kid. And in the end, it is all about making this world more open, inclusive and welcoming for all kids.

4. Hit all the NerdCamps!
I was an attendee at the grandaddy of NerdCamps - in Michigan. But I want to hit the others too. So if you are a NerdCamp organizer, I'm connecting on twitter!

5. Have fun.
I was super-nervous about "performing well" at this event. But don't worry. Everyone there wants to meet up and share. Just relax. And once I embraced that, everything fell into place.

To sum up, this is actually my favourite pic from the whole two days. It's from Bridget (the blogger at Bridget and the Books). She posted it on her twitter feed and I smile every time I see it. 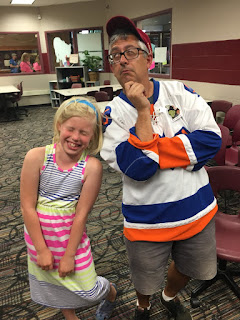